Neal and Rebekah Payne have been separated for two years and recently reunited in Ethiopia for a brief time.
Rebekah lives in Addis Ababa Ethiopia where she operates LeaMcD Educational Services for the Deaf of Ethiopia while Neal stays in the USA and drives a truck. He sends all the income he doesn’t need for survival to Rebekah for operation of the school.
The deaf youth are taught by deaf teachers and have a much better rate of success in passing national exams than those who only attend government schools. At the present time students receive tutoring and augment the teaching they receive from mission and government schools.
There is also employment training, employment placement and many other programs dedicated not only to deaf young people but also the “older” deaf including a deaf pastor, sign language training for families of the deaf,  and a classroom opened on Sunday where the deaf conduct their own church services.
Rebekah lives in a room at the school compound and Neal lives in the sleeper cab of his truck.
“No good deed is left unpunished”. Is an oft repeated phrase some would apply to Neal and Rebekah. They, however, subscribe to a different way of thinking. God’s Word. “Let us not be weary in well doing.” (Galations 6:8) is much more appropriate to them.
Recently there have been several unfounded legal “attacks” on LeaMcD of a very personal nature to Rebekah, the result of the necessity of removing several nonproductive, rebellious staff nearly two years ago.

For about seventeen years Ethiopia was a communist state. It is also the fourth poorest country in the world. The prevailing attitude among so many is: “White Americans and white Europeans are rich and we deserve some of their money.”

Bribes paid to judges and other government officials is an almost routine way of doing business. A few weeks ago Rebekah was hours away from a jail sentence because of this. Legal adviser Ejigu (say eh jee goo) Gabre-Michael has done a superb job of defending LeaMcD and getting the complaints removed one by one as they surface. He also has been very patient to wait for payment.

If you can, please help with this.Otherwise it will be necessary to stop paying rent on one of the two compounds which will result in the loss of classrooms and opportunity for the young deaf.
There is further financial burden due to the loss of Neal’s income while he visited, plus the travel costs incurred. 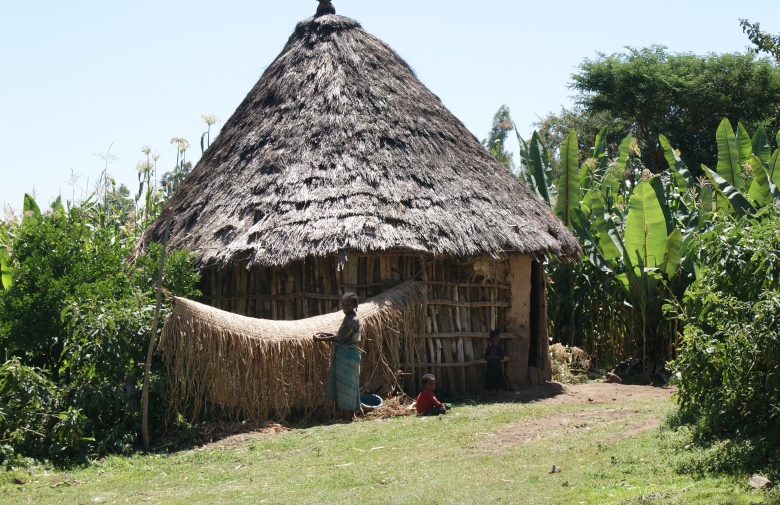 Mother and Child outside their tukul near Project Mercy

The following is a continuation of the story about that visit.

A greeting between people in Ethiopia, especially if several people are involved, can consume a considerable amount of time. The closer the friendship, the longer the greeting.

Great emphasis is placed  on formal but very courteous greetings.  After the bowing of heads to one another often the custom of one, two, or three “kisses” from one side of the head to the other while shaking right hands is practiced and exchanges about the health and welfare of the one being greeted and his or her family are shared.

Thus began our meeting with Marta and Demeke.  We were soon good friends.

Rebekah and I explained current happenings about LeaMcD E.S.D.E. and Ethiopian Child, and were invited to visit Marta and Demeke in Butajira.

Neither of us had any knowledge of Butajira, where it is, or what transpires there and no explanation was given but I quickly agreed to go, though Rebekah could not leave her responsibilities.

I arranged to connect with Helen, a volunteer who was part of the entourage, since she would be driving to Butajira the next day. Helen and I communicated several times by telephone throughout the day. First there was a fuel shortage and a long wait at a gas station, then traffic delays.  Several hours after the agreed upon time she arrived. “Welcome to Ethiopia.” It seems almost nothing happens on time in Ethiopia.

We drove through the smelly, taxi clogged streets and bumped through the road construction at the edge of the city. Once out of Addis Ababa the asphalt road surface was good. Just past a town named Alem Gena we turned left toward our destination.

Away from the smoke, stench and dirtiness of the Cities and towns Ethiopia is incredibly beautiful. The valleys, including the Great Rift Valley, are a patchwork of different shades of green surrounded by tall mountains. Few trees are visible and there are people walking or riding donkeys or horses in what would seem the most unlikely of places, where there is no visible evidence of habitation.

Often there would be stacks of firewood, a pile of pumpkins or bags of charcoal next to the road, items for sale to those passing by, though the house or tukul where the seller lives may be out of sight.

As evening approached we got fuel in Butajira and continued on through town and turned down a dirt road that was very rough put passable. I learned Marta and Demeke were responsible for the road, such as it was, having been built years before.

Everywhere there were people walking and often we passed dilapidated garies, a type of buggy pulled by horses or donkeys but mostly donkeys.

We bounced and lurched several miles down the road and finally, just before dark, there was a sign directing the weary traveler to Project Mercy. It was, I discovered, our destination.

The compound walls were about seven feet tall and made of mortared together stone. The car squeezed through the one side of the gate opened by the guards and we were “home.” 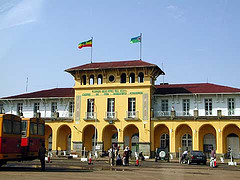 The purpose of Ethiopian Child is to aid deaf and orphaned children and youth in Ethiopia. In an effort to better understand LeaMcD Educational Services for the deaf of Ethiopia a school we had begun to support, it was decided that I, founder and president, visit and learn more about it.

Before I departed for Ethiopia in October our daughter Rebecca, mother to the two deaf Ethiopian grandchildren God has allowed us to learn from, gave me the phone number of a lady named Marta, about whom I knew very little.

Marta, I knew, is a lady from Ethiopia who was once a member of parliament and has something to do with orphaned children in Ethiopia. She had met Alisa, from Adoption Guides International, on a plane and was introduced to Daughter Rebecca by Alisa. The meeting on the plane occurred because Alisa wears an easily identifiable necklace from Ethiopia. Marta recognized the necklace and began a conversation with her.

I called the number and talked to Marta.

She informed me she was coming to visit at LeaMcD E.S.D.E. compound and meet me and Rebekah Payne, founder of the school.

Addis Ababa is a city of perhaps five million people, 20,000 taxis, a dozen or so traffic lights, and only a few named streets.

LeaMcD E.S.D.E.  is near the historical Djibouti Ethiopia Train Station located behind Golden Lion Park where there is a large statue of a lion, another historical landmark. The only hint of trains now is a few derelict, very ancient rail cars behind a fence. The terminal building is nearly one hundred years old and still stands. It is in use by various offices and a store.

In the area in front a constant throng of people moves about. Big, noisy, smelly red and yellow diesel busses arrive, pause, discharge, reload and depart, spewing a constant stream of smoky exhaust. There is the ever present sound of loud engines and horns as the busses, tiny blue taxis and pedestrians jostle for position, nearly organic, like locusts swarming.

It was decided I would wait there at a pre arranged time to meet Marta and direct her rest of the way to LeaMcD E.S.D. compound.

Finally I saw a silver metalic SUV at the far edge and decided to walk over and inquire. It was, indeed, Marta, Demeke her husband, and others in a three car caravan, searching for me.

Future posts will detail information about Ethiopian Child and it’s activities involving deaf and orphaned children and youth in Ethiopia.